Since the 1960’s the Irish population have been told by their Government that not only is water fluoridation safe, but it is also effective at reducing dental caries (decay and/or crumbling of teeth).

But in May 2010, the EU Scientific Committee on Health and Environmental Risks (SCHER) published a report which clearly shows water fluoridation is not effective.

Because, despite starting from a better position than most, the rate of Decayed Missing and Filled Teeth in Irish 12 year olds is now HIGHER than that of 12 year olds in other non-fluoridated EU countries.

Not only that, but many of those other non-fluoridated countries managed to reduce their DMFT scores far more than we Irish. They did this without resorting to water fluoridation! 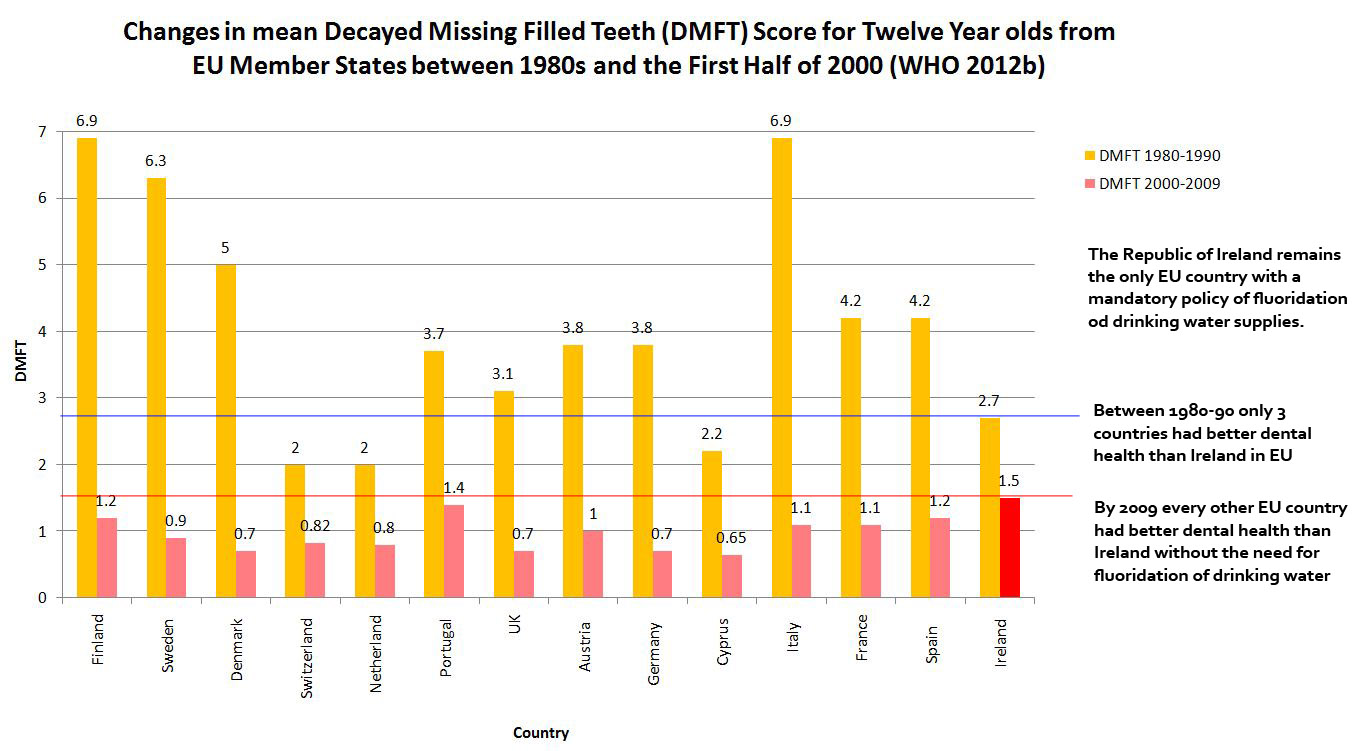 Graph copied from Declan Waugh’s response to Junior Minister Jimmy Deenihan. Declan is an environmental scientist who has put together a stunning technical report on the human and environmental toxicity of water fluoridation – and the legal implications thereof. He submitted his report to both the irish Government and the EU. Which, in my opinion, means that when The Girl Against Fluoride takes the irish Government to court, they can’t claim they didn’t know they were doing harm. So the final legal cost to the State will be far, far higher. Download a summary (PDF, 805kb) of this report and/or the full document (PDF, 3.8MB).

You can learn more about why and how cookies are being used, or switch them off in SETTINGS.

This website uses cookies to provide you with the best user experience possible. Cookie information is stored in your browser and performs functions such as recognising you when you return and helping understand which sections of the website you find most interesting and useful.

This website may also, at certain times (e.g. when submitting a Contact Form,  making a purchase), ask you for personal information like your name, email address etc and more.

Such information will be:

This “Strictly Necessary Cookie” should be enabled at all times so that we can save your preferences for cookie settings.

If you disable this cookie, we will not be able to save your preferences. This means that every time you visit this website you will need to enable or disable cookies again.

This site uses cookies – small text files that are placed on your machine to help provide you with a better user experience.

In general, cookies are used to retain user preferences, store information for things like shopping carts, and provide anonymised tracking data to third party applications like Google Analytics or others.

While they do improve your browsing experience you may prefer to disable or manage cookies for this and other websites. You should search online for instructions on how to do this for your particular browser.